What do we mean by “Laloux’s model”?

We are called Teal Unicorn. We say the term “teal” comes from “Laloux’s model”.   What are we refering to?

Frederic Laloux wrote a great book, Reinventing Organizations, which stimulated a lot of the movement to new ways of working in the twenty-teens. I think it has since been supplanted by Steve Denning’s Agile of Agile, and now Aaron Dignan’s Brave New Work, which is currently my recommendation for first book to read. But it is still a damn good book.

In the book, Laloux took a colour model for advancing levels of social maturity from Spiral Dynamics, and changed it round to his own colours and slightly different definitions.  Which didn’t endear him to those in that philosophical community, especially when his book was wildly successful and theirs weren’t.

We hacked the model a little ourselves, we put back the levels of Reactive and Magical from Spiral Dynamics, to end up with this: 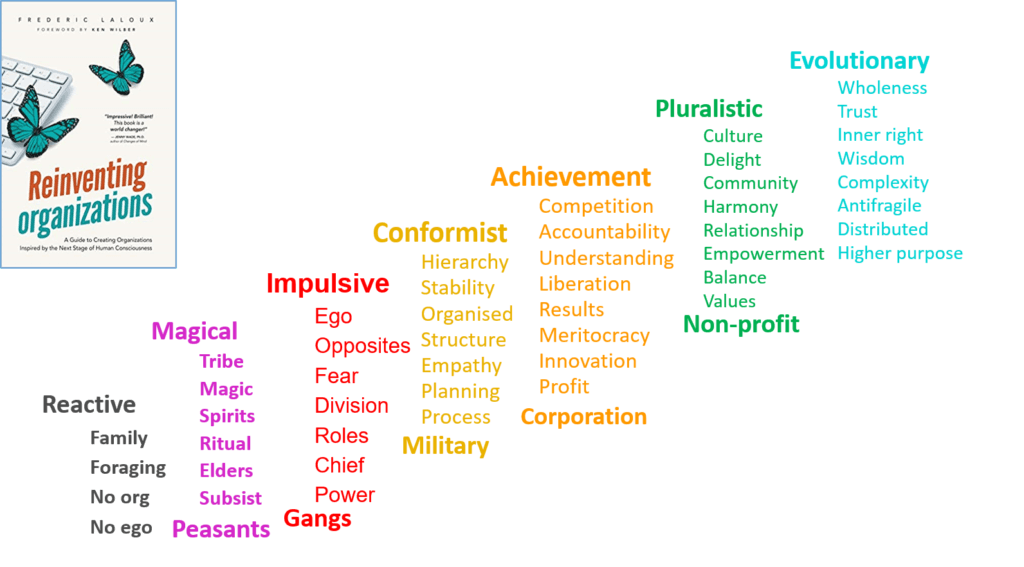 Since then, “teal” has entered the lexicon as a buzzword for high-functioning organisations.  Teal is code for the highest form of social culture (so far), which makes three realisations or “breakthroughs”:

Self-organising. People work best in small autonomous teams with no one “in charge”. Work flows to the teams and people flow to the work. Staff have skills rather than roles. The organisational system works on peer relationships not hierarchies.

Wholeness. being true to ourselves, bringing our whole self to work (Maslow’s “self-actualisation”). We restore the unity between truth, goodness, and beauty.

Emergent purpose. The organisation is organic, it grows. We are driven by a purpose and direction that emerges from the organisation. (Laloux uses the word “Evolutionary”, but evolution is a complicated concept that often leads us astray when thinking about organisations, so we say “Emergent”).

It is part of a broader movement to new ways of thinking.  There is a bit of a backlash against teal as a fad, but we love teal.