There is an advance in social thinking underway that started after WW2 and is still rolling (with a few obvious setbacks around the world right now). This thinking is transforming IT, work, management, enterprises, government, and society. Its impact is far reaching enough to talk of it as a renaissance in thinking, a refresh or step change that comes only once or twice a century. This is not an exaggeration. The concepts that Teal Unicorn deals with, in advancing enterprise work and management (especially management), rise from an even deeper philosophical shift which we are not qualified to discuss in depth though we need to understand as much as we can. Here’s Rob from Teal Unicorn on this topic: (one take – shot in 18 minutes! )

We see the new thinking everywhere, so this page points to a few models we know of, which all point to this renaissance, this flip, step-change, new age… Social thinking is crossing a boundary (and just in time, looking at world politics). Feminism, diversity, egality, socialism, empowerment, digital, virtual, complexity, networks, … so many powerful forces are at play.

And the roots run deep. As soon as Scientific Management appeared at the turn of last century, there was an immediate reaction promoting more humane thinking. The struggle for women’s rights is even older, as is the fight against slavery and for equal racial rights. The Twentieth Century saw the rise of social welfare, global collaboration, universal health care, foreign aid, pacifism and arms control, the Marshall Plan and the Peace Corps, human rights, the hippy movement, feminism, gay rights, environmentalism, corporate social responsibility and multiple bottom lines, stakeholder capitalism, and many more developments all on the same trajectory of higher social consciousness.

This directly impacts work and management. Managers everywhere need to get this clear: the world is now driven by values over value. To have products aligned to customer values, you must live those values. You can’t fake this. You will get called out. And the cognitive dissonance will damage your organisation. To win at this game, we must be a better organisation, embracing the values of our community.

Friedmanism is stone dead. It gave us all the gross excesses of the last few decades, from Madoff to Trump. Get with the times.
Greed is not good. Your customers, partnered and staff all expect you to live values through your work.

Forbes magazine called Freidmanism the world’s dumbest idea. Drucker and Keynes would agree. The US Business Roundtable redefined the purpose of a corporation to  ‘create long-term value, better serving everyone – investors, employees, communities, suppliers and customers’. Barron’s agrees. (If you don’t know these sources, they are pillars of right wing capitalism).

You can hear this “values over value” song everywhere now: (I’ll collect more…)

Management lessons of The True Believer
A 20th-century working-class philosopher has a lot to teach modern workers — and managers — about finding meaning in life, and on the job

(How NOT to do it: Sloan Management Review with a cynical approach to focusing on stakeholders who create shareholder value)

You don’t need to embrace a religion, or worse still the antiscience of the counter culture, in order to grow into these higher-level concepts. They’re the future of humanity. The future is already here, it is just not evenly distributed. We see it everywhere, it has been arriving for decades.

Some models that all indicate a phase change, a crossing of a boundary, a new age, are:

Game A / Game B Modelling changing social behaviour based on complexity theory.

Wilber’s Integral Theory (popularised by Laloux. Wilber et al used several different sets of colors, we use the one Laloux did. Don’t @ us.)

Graves’ first- and second-tier Graves, Wilber, and a umber of others collaborated. This was one of Graves’ contributions.

Values over value Friedmanism caused great harm to corporate ethics. It needs to be rejected.

The Age of Aquarius Slightly tongue in cheek, but even the hippies of the 60s saw The Times They Are a Changin’. 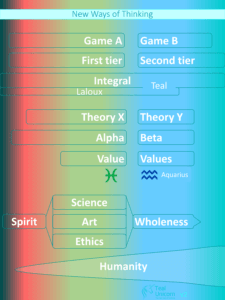 As well as many models which point to the concept of a flip, moving into a new phase, there is another concept that emerges everywhere: the reunification (in the West) of Science, Art, and Ethics – of truth, beauty, and goodness – which parted ways in the Enlightenment, when Truth rose above all. (Here is a great read on uniting science and art).

This comes out in

We are not here to say any or all of these models are accurate. All models are wrong, some are useful. And there is a lot of bullshit peddled in their names, especially antiscience. In fact it is hard to find material about some of these models, e.g. Integral, that isn’t steeped in nonsense. The point is that it is evident that something big is going on across society, and overall it looks positive.

It is an optimistic view of human evolution, which is entirely justified based on historical data: humanity gets better. Across the world, organisations and societies are primarily competitive capitalist green with a few pioneering into teal, and a larger long tail spreading all the way back through orange and red to primal magenta (or grey, or whatever, models aren’t consistent). It is a rising bubble of social progress. Hans Rosling taught us to see the trends.

We embrace that view. We look at what it means to be a “small-a-agile” manager in these New Ways of Working and Managing in our new book, The agile Manager .

What did we miss? Any more?

[Update as the world goes into crisis:

The meaning we find in all this lies in what we make of it, what comes out of it. The crisis is going to be longer and deeper than most people have realised yet. We owe it to ourselves and our kids to ensure that the outcomes are a much better world than today.
We are already in this shift to a new enlightenment which has been running for decades. Perhaps all the negative energy will kick it along even faster.

This lockdown is only the overture. There will be waves of lockdown until infection or vaccine gets us to herd immunity.
Then there is going to be a severe depression. In fact we are in it. The USA is likely self-immolating right now, which will impact us all. We can only hope China rises to the occasion to help stabilise the global economy.
Then there is the political chaos of the US election. It won’t be normal, violence is likely.
Then there is the global catastrophe of Covid-19 in low-income crowded countries. And waiting in the wings for when we have dealt with all that, clinate change which is becoming uncomfortably real.

Our social capabilities will be sorely tested. It may not sound it, but I’m genuinely optimistic that a new phase in social consciousness will be forged in this fire. The Great Heave is already underway.

It’s tragic we have to go through this but life is cyclic, it seems inevitable. The result is often a stronger better society.]