The world is increasingly VUCA: Volatile, Uncertain, Complex, and Ambiguous.

Not everyone has heard the term VUCA. Over 30 years old, it has been used by the military to describe the new geopolitical world, and increasingly it is used day to day to describe our lived experience. If you haven’t heard about VUCA yet, google it. We are not about to give you yet another potted history. We slightly changed the wording of VUCA = volatile, uncertain, complicated, and ambiguous. VUCA adds up to complex.

Why is the world increasingly VUCA?

There are multiple reasons, but the primary one, probably driving all the others, is the accelerating rate of progress in technology, especially in three domains: digital, biological, and materials. The biggest impact of this is sociological; society can’t adapt to the new physical environment as fast as it changes. So new technologies are disrupting all our social structures and behaviours, from government and politics to education and reading. Nobody agrees the codes of behaviour in new contexts like the internet. Regulation emerges only in response to problems once they become unbearable. And so on – you know the story. How does work deal with a VUCA world? 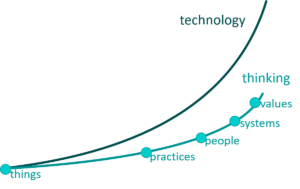 In the past, we were able to use simple linear models of reality, which said that we could define what we were going to do for a defined result, then execute, then measure how close we came to the defined result.  The assumption here is that reality won’t have changed much from when we define what we are going to do until when we finish doing it.  In most domains, that is no longer true except for very short timeframes. Conventional project management with its timeframes measured in quarters and years has been called “delivering last year’s requirements”. It may have worked in the past but less so now. What got you here won’t get you there.

Treating the world as predictable was always an approximation. It worked when the pace of change was low. The target didn’t move in the time it took to get there. Now our targets leap around like mad things. We often talk about navigational stars to guide us, but this is a misleading analogy. We pick a “north star” because it doesn’t move much. All stars move slowly and predictably. Outside the analogy, our “stars” in the modern world are more like fireflies. You look away for a moment and your target isn’t there any more.

Of course, the world never was stable. Life blindsides you. But conventionally, we would treat that as unforeseeable, the unexpected, surprising, an act of god. We would treat it as exceptional. It’s not. It is normal for random things to happen – the world is random. The myth of predictability was only ever a mental model. Now it is becoming impossible to ignore the reality. We must adjust to expecting the unexpected, the black swan. We must act on the assumption that we don’t know what the world is going to be. The future is disordered, foggy, random.

Now go back to our advance to understanding the world as systems. Near the end of the last millennium, we finally developed some rigour in understanding that those systems are complex, in a strict mathematical sense of the word. This leads to awareness of some basic principles:

If we truly understand these principles, then they radically change how we think. If we tightly constrain the system and keep it simple, then a simple model can be used, such as a network diagram, process flow, or value stream map. But again, it is only a model and it was always an approximation – the myth of the simple system. Not only is the future murky, but so is the present. It is not in the control we think it is.

Here is one interesting way to depict VUCA that represents these two effects: the unknown future and the unknown present. 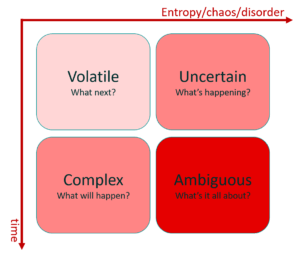 It’s a VUCA world. We must learn to deal with it.  That’s what the New Ways of thinking, working and managing are about. That’s what the main slider on our homepage is about.