A project is a wave in a product structure

If you build your organisation out of projects you are building out of blocks that evaporate. A project is a transitory phenomenon, not a structural component. You probably know of one or more organisations whose BAU is whatever was left when the projects vanished. Building a business out of projects’ droppings is a bad idea. We should build our organisation out of products, with standing product teams which are a permanent function for the lifetime of the product. Our New Ways operating model is based on product not project.

The #noprojects hashtag is as silly as the #noOps or #noestimates hashtags. “Product not project” doesn’t mean we don’t have projects anymore. Projects still exist – they are just no longer the primary building component of the organisation. (Good books on this: Project to Product, and #NoProjects)

Projects are a transitory wave which passes through the product structure. A project is a surge in work, to deliver a defined outcome, a step-change in a product or products. So therefore it is a surge in the number of people in the team(s) and in the velocity of the team(s) as we deliver the wave of change required by the project.

We still have project managers too. But they perform a logistical support function. Project managers no longer stride like gods, commanding everything: hiring and firing, owning  a big chunk of the organisation, making product decisions, and driving the priorities and structure of our organisation. Certainly, this form of Project Management was the worst thing that ever happened to IT, and probably to other domains too. Instead, PMs should provide services to the product teams, to organise timeline, money and resources. You know, what project management used to do before it got out of hand.

And we still need project managers, to manage the budget, timeline/milestones/gantt, and people numbers, (I.e. what they used to do before they got out of hand) for the surge across the product teams. They can also track benefits realisation, and maybe project feature backlog. 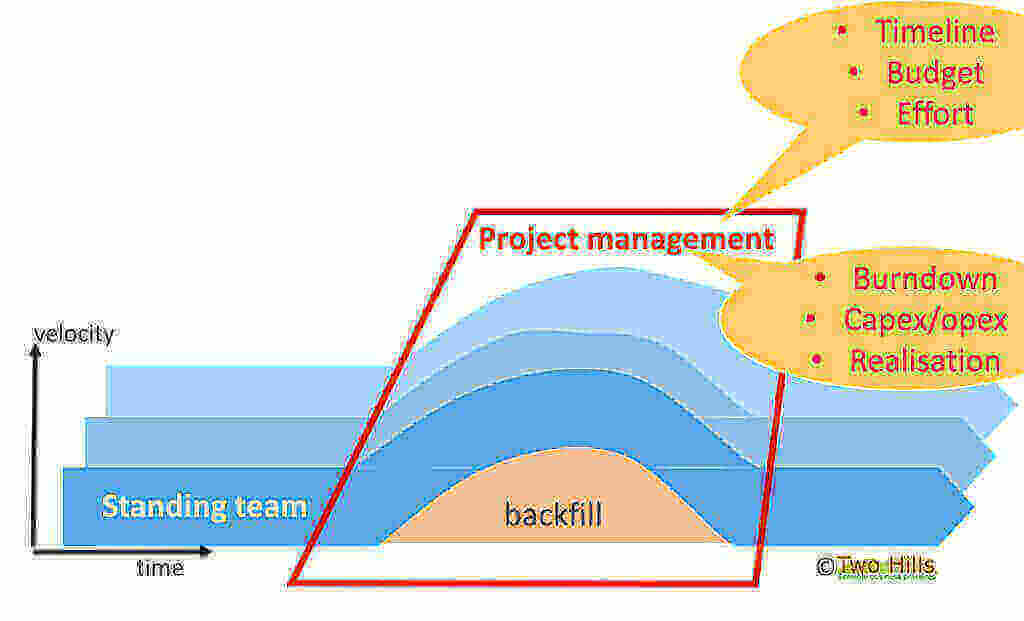 I’m not sure I’ve seen the “project as a wave” model elsewhere. I may have picked it up subconsciously, or it may be an original idea. What do you think? Have at it.

[1] I was shocked to learn recently that Tuckman’s model doesn’t stand up to empirical test – it doesn’t fit observation.  Never mind, it’s a useful wrong model 🙂