Self-organising through the J-curve to better performance 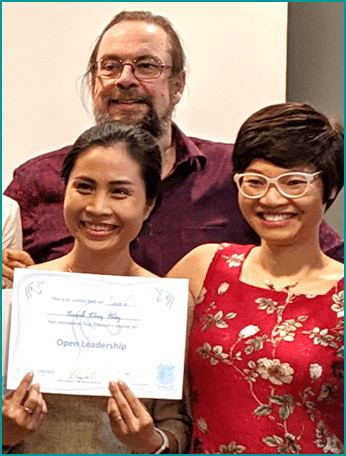 We have 40 staff involved in arranging the sale of properties, as well as investing in land and houses, in Ho Chi Minh City, Vietnam.

Hằng came to our agile Manager (small “a”) training in Saigon, and keeps coming back for more. She brought along her managers, and she joined Cherry’s weekly online coaching group. She and Cherry talk several times a week to coach and support her, but we are not consulting onsite: Hằng devises and implements her own solutions.

Previously the sales teams were divided into teams: a fixed number of 5-8 people in a team with a team leader. When a team was organised that way, everyone functions and interacts within a small scope under the supervision and support of the team leader. We found that organising teams this way caused bad workflow that hindered the development of individuals. People had to spend a lot of time reporting. Also, to do a sale, a team leader needs to support their team members in every transaction as well as to pay attention to very small details such as punctuation, as well as the working attitude of everyone.

As well, experienced members who can independently sell had to still report and receive support from the team leader (for example, making contracts, etc.), that led to a lot of work for the leader, wasting the time and skills of every party involved, and left no time for improvement. When one member did not fit in the group, they were afraid to switch to another group although they thought it would be more suitable. The leader of the group was still active in sales themselves, which led to a conflict of interests among the members and the leader. Everyone was unhappy, tired. We rarely saw interaction, coordination, and information sharing with other team members.  This lack led to ineffective results.

We decided to set the teams free. We took team leaders out so it is up to everyone to organise and manage themselves. People choose anyone that they can coordinate with to form a team naturally. It can be a group of 2 people, 3, 6-7 people, and also people who work independently but have a support team whenever they need it.

This was not as rash as it may sound. They had made smaller experiments first with one team to verify it was workable.

In the beginning, we still maintained the support of team leaders to support the members when needed. Later on, we formed an official support group, where everyone can come to them whenever they need. The support team does not specify exactly who they will support: any worker can share with one or all three members of the official support group, as long as they feel safe and can best support his or her problem.

It is important to understand that this support group is made up of three experienced managers – they are servant managers.

During the month after changing the way of working, the performance of the whole company dropped significantly because people were not familiar with the new way, the level of interaction decreased, the collegial spirit went down, people felt bewildered, and most of them wanted to go back to the old way, even though there was the agreement and consensus of 100% staff before. They had all agreed on the obstacles.

During that month, some people formed a group and worked well, some people had difficulty forming a team, most felt helpless and wanted to return to the old way and didn’t accept change.

Beware the “J-curve”. It always happens on any change.

We then had a half-day company meeting, under the guidance of Rob and Cherry from Teal Unicorn, to help :

· identify the values for the whole team to follow

· draw the value stream to find the reason why transactions fail, where are the bottlenecks, why performance drops

· decided some areas for improvements, an action plan for things that can change immediately and what needs to be done in the future

We conducted a visioning exercise to create focus on company values. Some staff looked a bit mystified or cynical during the exercise, but later in the afternoon they came to realise its value. Cherry gave a motivational speech about why it was happening, how a J-curve was normal, and how collaboration was essential for them to now rise up.

Then we split the staff into three groups for 90 minutes to look at value stream and what the blockers were; who was struggling and what support they needed; and what were the opportunities for immediate incremental improvement. Staff self-selected their group, so most were engaged.

We found the big problem was that people lacked trust to collaborate, share information, and help each other among staff. As well, people did not have adequate support from the company to timely guide and remove obstacles in the process of working, leading to the performance of the whole company and the morale of people going down.

After discovering the problems and finding solutions, we have had many successful transactions. Specifically, in the first 10 days of October, Vinh Đức has successfully sold 9 properties. In 20 days we have sold more than the number of sales in September. All are the results of good collaboration between members. Even new staff who in 5 months hadn’t sold any property have been successful in selling houses.

Some people left initially, but we think that is because poor performance is made visible. Culturally, people are not accustomed to being exposed: in other organisations, many coast within the group. Now it is stable and morale is up.

Their success continues. Sales are not as high as they would like but the market is flatter than last year. This is one of the challenges with organisational change: it is never a controlled eperiment, there are always multiple concurrent changes, some out of our control. Cause and effect is never provable – it is only ever a hunch. We must beware of confirmation bias.

One of the great things about the new way of working is that even though you’re still in the support group and have the role of a leader, you no longer have to do micro-management so we have time to sell and still care about others.

Staff no longer have to spend time reporting, but spend most of their time selling, cross-interacting, and diversifying with many staff that they used to hardly talk with before.

When I talk to people about what they think, I notice the changes are huge. Some staff were very harsh at the beginning and did not support the new way of working but now they think differently and are more active. People in the company are more creative, always looking for ways to improve their work, to help each other, the more experienced ones help the newcomers, the better sales people cooperate with the less successful members. They often tell their friends about the company and how we operate, and everyone likes it.

Of coure it is not all rosy. They had challenges getting the demand balanced across the three people in the support team: everybody prefers to go to one. We coached them to hold a group workshop to design how support should work; and the three support staff worked out how to load balance amongst themselves.

Other challenges continue. Commission schemes are an endless source of debate, and are probably never optimal.

When approaching the perspectives, ideas, and methods from Teal Unicorn, I know what is right and what is good and how to get there. If I had not learned things from Rob and Cherry, if I hadn’t been greatly encouraged and accompanied by Cherry, it would have taken so long or I would never have stopped to improve. I would never have thought about ways to set people free and to be better together.

Thanks to her guidance and daily feedback to our work, we learned the stages of change and how to face it. I know and believe that I can do many things with the team to make them happy. I was fortunate to have the chance to attend Cherry’s training courses to know about the right and beautiful things, so my mission is to help my people to be better, with sincere sharing about where we are going, why we are going that way. They will not be afraid to go along with me.

Our next step will be to encourage the group to study each others’ ways of working, to understand the different models emerging, and their pros and cons. Then a support function can hold this knowledge and coach the teams. Vinh Đức will open a second office in the new year.  This knowledge will be essential to allow them to scale quickly.

At Teal Unicorn, we never give answers or “design solutions” (although sometimes we offer suggestions). Nobody knows how this agency should work. Those best equipped to find out are those doing the work, through experiment and exploration and sharing. They will continue to collaborate, and to adapt to changing people, demands, and conditions.

I realized that I was able to apply it partly because I brought all my managers and some key people to Cherry’s training courses, so when I proposed an improvement, no leader left me. Initially, some group leaders were somewhat disappointed when their roles were removed, but thanks to the knowledge they obtained, they are aware of many things and still accompany me.

By now, the sales results of all team leaders are superior to the previous month. One of them got 5 successful transactions/month which was previously only seen in the sale teams, even though they are still in the support team.

Team leaders used to get commission on their team performance. Now they sell directly themselves to earn commission. We suspect this will create conflicting incentives. If so, we will suggest to Hằng to pay them commission on the performance of the whole branch, and to stop selling directly.  This will allow them to focus on supporting and coaching, and to work on management functions: sales, marketing, customers, finance, information, personnel, operations, risk, and assurance.

I am not alone, and happy to see that people are truly creating more value, no one has to drag anyone, seeing my people grow up day by day, just like I plant seeds and they become big trees. Now it is time to fertilise to get more sweet fruits.

Hằng has been with us from the beginning, has given us so much support, and is now a personal friend. We are so happy and relieved to see her company humming with strong managers emerging, as she is pregnant and we did not want to see her stressed.  We hope she can step back with confidence and enjoy the new stage in her life.