We often need to shelter a bubble of new ways within an unchanged system of work.

The whole organisation doesn’t switch to new ways overnight. So as the adoption of product-oriented improvement spreads out from some starting point, it runs into the established project-oriented ways of working and managing.

There is a boundary problem where the “Product not Project” structure of standing teams and streams of work meets the project\business-case structure of programme/portfolio management and financial governance.

At that boundary, management needs to create white space to stop the two models clashing, and to mince up the money, turning big project gobs into steady team streams. This boundary moves out ever wider in the organisation, as our changing behaviour pulls change from those around or ‘above’ us.

We need the support of managers at each of those levels to create the buffer zone and provide the conversion from one model to the other, or the old model will grind us to a halt. 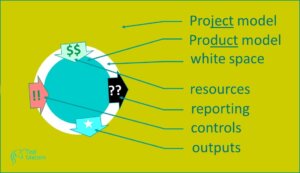 There are four main interfaces across the white space, where we need to convert from one to the other:

In those interfaces, we will be translating, reformatting, repackaging, or some combination of those.

You will always have a boundary until society and government embraces agile thinking. In fact, you still will: at some sufficiently high level it is probably still a project.

One client of ours freed a team to pioneer working in Agile ways, so they published a list of existing controls and reports they were expected to deliver, and the corresponding ones they would be delivering instead to achieve the same outcomes. This caused some friction, but it also resulted in some governors working with them to come up with better proposals than the team’s own ones.