Years ago, I drew a 3D version of Cynefin as I saw it. Others have done the same. It came to me while I was trying to relate Cynefin to my own simpler sense-making approach Standard+Case. Dave Snowden himself suggested an improvement to it. I keep refining it, I’m now on version 11.

The bits in blue come from Cynefin. The rest is me. 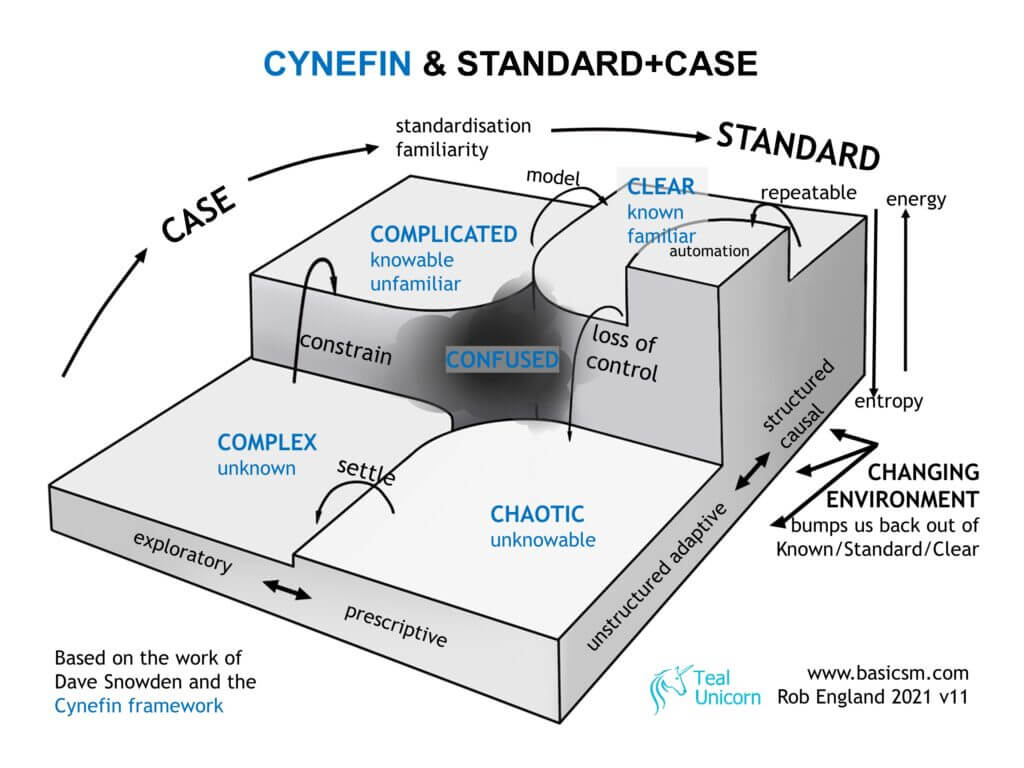 This has stimulated much discussion on social media when I shared the latest version. Contrary to how it may seem, I’m not much interested in abstract philosophy of work. Our passion is its practical application to make work better. “All models are wrong, some are useful”. (Dave will remind me that Cynefin is not a model, it is a framework). Cynefin is a great thinking tool, a lens on reality. I’d like to leave it at that.

However, there are two aspects to this 3D Cynefin diagram that people always ask about.

The first one comes from Dave Snowden himself, the second one comes out of my fevered mind.

One point that helps both questions: Cynefin is a sense-making tool. It doesn’t describe kinds of systems, it describes kinds of situations. I believe this is a common misapprehension of Cynefin – I say that because I fell into it.

Another point to help in understanding: the physics of thermodynamics and the depiction of three dimensions are metaphors. We are talking about human complex adaptive systems of work here. They don’t exist (only) physically, they’re conceptual. Don’t stretch the metaphors.

Why is Complex a lower energy state than Chaotic?

Yes, this sounded counter-intuitive to me too, when Dave first said it to me.

My layman’s explanation : Putting energy into a system reduces its entropy. It takes energy to break constraints, to introduce turmoil. You stirred the soup, it’s now spinning. When it stops it will have less direction, less energy, hence more entropy.

Here are direct quotes from Dave Snowden explaining it better, in response to the many many queries (sorry Dave):

No human system is closed and chaos is very difficult to sustain, it takes a lot of energy to do so – remembering that chaos in Cynefin in the state of no effective constraints.

Why is automation at a higher level than the general Clear domain?

It takes a lot of energy to maintain an automated system. Build it, update it, run it. The diagram is showing not the energy being expended in work, but the effort to achieve/maintain the state, to constrain it, to reduce its entropy enough that an inflexible (un-agile) machine can cope with repetition.

E.g. DevOps CD. The effort to set up a manual code release process (write procedures, build a few environments, train people) is way less than to build an automated CD pipeline. That’s why people do it manually.

Or a factory production line: it is much easier to train people to do it manually, especially when the time comes to reconfigure, compared to building and setting up robotics. (I used to work as a maintenance engineer in a whiteware factory).

Just like the energy needed to turn a situation Chaotic, in our first question.

And of course it is an even greater “fall from grace”, a plunge into chaos, when automation fails than when manual process fails. To err is human but to really screw things up you need a computer.

As well as these two questions, a few other things that have come up:

There are subtleties that could be in the picture, for example a slope between clear and complicated, or many more paths between the domains. They are all perfectly valid modifications but I am trying to keep this diagram simple and accessible. And I’m trying to share what I think are a couple of small insights that I have had.

Why move which corner of Clear that automation sits on, from the earlier versions? Because when you fall off automation you seldom fall back to simple, you usually fall into chaos.

If you want a much more elaborate diagram that is much better drawn, then have a look in the new Cynefin book which has a diagram that I had a small hand in producing, drawn by Martin Berg. If you check out that much more … er…. complicated version in the book, it has many more flows between domains, including a lot in and out of Aporetic/Confused (the full name of that domain), but I choose to keep this picture simple