The gaslighting, indoctrination, and outright brainwashing of the workforce, especially in countries like the USA and India, never fails to horrify me. 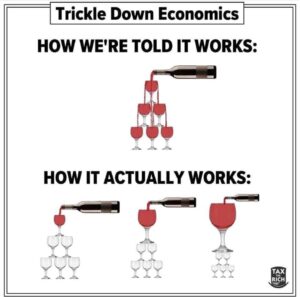 In recent months I’ve come across:
– anyone can get rich if they work hard.
– the rich aren’t there because of luck.
– billionaires are benevolent.
– billionaires know better than an elected government where all that money should be spent.
– you have a right to unlimited wealth if you can acquire it.
– bosses should be paid hundreds or thousands of times what their staff are because they are that many times better.
– there is no upper limit to how much money a person needs.
– doing what you were paid to isn’t enough.
– you should work for little or nothing because you will make more later.
– losing your job is just bad luck but losing investment is unacceptable.
– you should give the bulk of your life to your employer but your quality of life is not your employer’s concern.
– people can be measured. If you don’t make the numbers, you are expendable.

They’ve really got them suckered. it’s the same scam as religion. Believe and you might get a payoff later. Meanwhile all the money gets skimmed off. 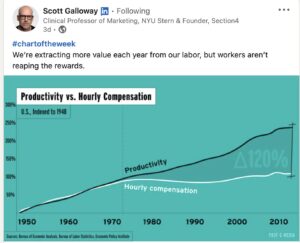 Capitalism is not the problem. Communist counties have the same issues. Capitalism can be highly successful if kept in check, the way every small-s socialist capitalist democracy does, from Norway to New Zealand.  Oligarchy is the problem, as demonstrated so brutally in the USA.

Society does advance. Friedmanism is on the ropes. But it’s not down. The rich are fighting back, all round the world. Not least Koch and whoever else is behind Bannon, Trump, and Truss. We have a long way to go.