Never judge a decision by its outcome

We need to defend how we came to a decision, not what the decision was.

If you Observed well

Then the Decision you took and the consequent Actions are justified. 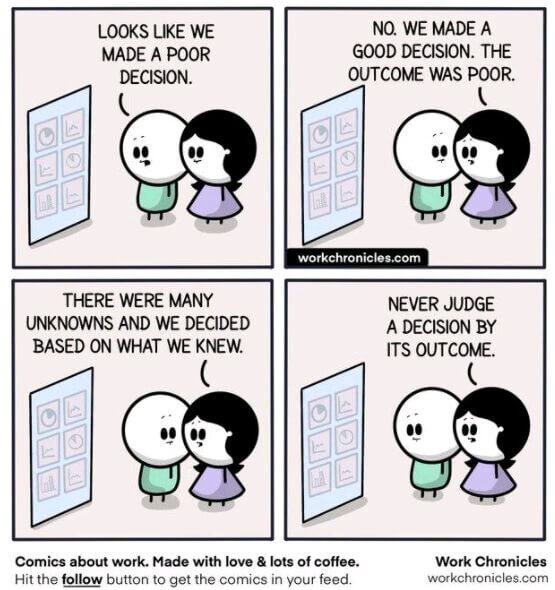 People are too often called on to justify their decision because of the eventual outcome. It’s a shame to work in a culture where that is true

Especially, it’s a shame that almost all public servants are afraid, because the public – and in particular the media- are so brutal. This destruction of psychological safety makes it almost impossible for the civil service to move. But the paralysis is everywhere. People are afraid to make bad decisions because of the consequences of the outcomes. The paralysis is a major issue in many organisations.

How to define “bad”?
Not compliant with existing policy or directives is one.
Wrong decision-making process is another.
Both of those are independent of the outcome.
I dont see any outcome-related criticism that isn’t hindsight bias.

We can define “bad”, but not by the outcome.

If we arrive at the decision in a bad way, then we should improve our process.

But if we arrive at the decision in a good way, then a bad outcome is indicative of something else, not a bad decision. The outcome is only loosely related to the decision. Next time the same decision might lead to a wildly different outcome. Let’s stop pretending we are omniscient, or – worse still – expect others to be, and then censure them when they’re not.

If we made the “wrong” choice at the time, that means we followed the wrong steps or the wrong reasoning to come up with the decision at that time; or it means there was something we couldn’t know; or it means the future was unforeseeable (as it always is). What happened later is only indirectly attributable to the decision. We can’t directly blame a decision for an outcome because they are never completely coupled.
If you did the best job possible in making the decision, then what actually happens is irrelevant to judging how you made that decision. There is an element of luck involved. And human error: many a slip twixt cup and lip.
If we did the best possible job we could have in making a decision and it turned out badly that was bad luck. There is a wonderful safety maximum that “Success and failure happened the same way”.

By examining a number of outcomes we can improve how we make decisions by seeing which methods were more inclined to a good outcome.

A good process leads to decisions that more often lead to good outcomes, yes. But any one decision may lead to any kind of outcome. We don’t control reality. Therefore any one bad outcomes does not reflect badly on the decision process.

NZ went into lockdown. That doesn’t mean it is the best thing for every country, but how we decided to was well done.
If a country decided through observation that lockdown is usually the best strategy therefore that’s what they will do regardless, that’s a bad decision process. It may turn out well but it was a bad decision: no scientific consultation, no social collaboration, no thought.
Conversely if a country gives it lots of careful consideration, observation, and collaboration, and decides to lockdown, and then it turns out very badly for them, it wasn’t a bad decision.
Poor countries’ economies might collapse.
Autocratic rulers might use lockdown as an excuse to seize dictatorial power (Trump missed that trick).
A mutation might get away anyway.
The only way we know lockdown will work is to do it.

We can get the process of making a decision wrong but we can’t get the decision wrong. Nobody knows what would have happened if you had decided something else.